What does Robin Hood have to do with Yom Kippur? 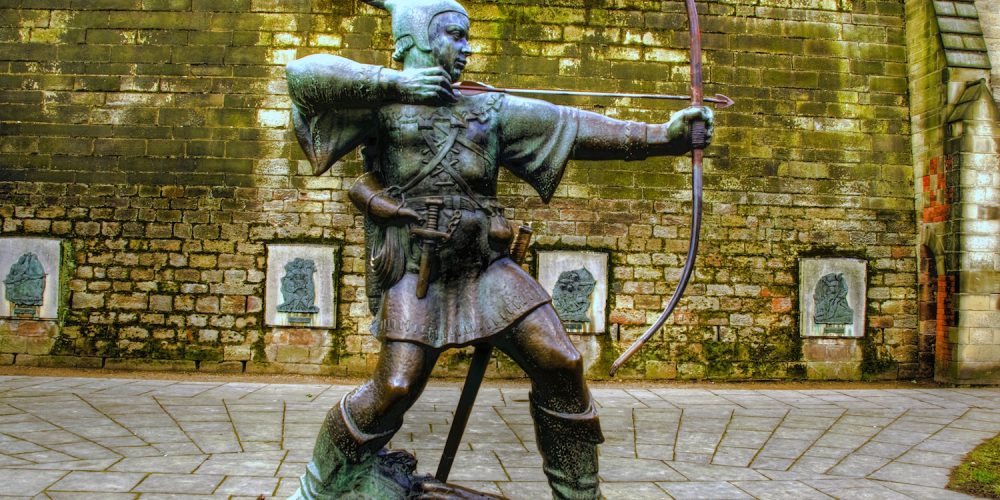 There is no dispute whether or not Robin Hood was Jewish… he was definitely not. But that isn’t to say he has no Jewish connection. According to historian Rev. Joseph Hunter, there was a pub in Nottingham at the corner of a street once called Jews’ Lane. Robin Hood was known to drink there with outlaws, renegades, and Jewish metal-workers. Perhaps he even shouted a l’chaim once every now and then.

However there is a different Jewish connection, one that is based on Robin Hood’s legend as a skilled archer. But what’s so Jewish about archery?

Shira Rosenblum, an archery instructor at Camp Ramah in the Rockies, explains that proper safety on an archery range is just like refraining from lashon hara (or gossip). She says: “Once we release our arrows from the bow, we have little control over where they land and are unable to repair the damage caused by their sharp points after removing them from the targets. So too with our words! Once we say something, we have no control over how far our message will spread and who we may hurt in the process.”

It turns out that Jewish liturgy agrees with Rosenblum’s metaphor. On Yom Kippur, we repeatedly recite the words “al chet,” which are often translated as “the sin.” But chet is actually a term borrowed from archery, meaning “missing the mark.” Why would Hebrew use archery metaphors in such a important and sacred context?

In archery, it takes a lot of practice to hit the “mark” or bullseye of a target. As personal growth coach Nina Amir explains, “On Yom Kippur…Jews look at the past 12 months of their lives to see what targets they set for themselves, how they practiced hitting those targets, and if their aim was true. They look at the targets to see if they managed to hit the bull’s eye. During this period of introspection they notice not only if they aimed their arrows and shot, but if they even got close to their mark.”

Robin Hood was not only good at archery, but he was a fighter of injustice. He rarely “missed the mark” on both the field and towards his noble goals. This Yom Kippur, we should look at Robin Hood’s ideals and ethics in shaping our goals for the new year.

This doesn’t mean we all need to start stealing from the rich and give to the poor. Instead, we can find new ways to improve ourselves. We can fight oppressors and help those in need. We can always try harder to hit that bullseye.

(For other Jewish connections to Robin Hood, check out these notes from Sharonah Fredrick.)