The World’s End: A Perfect Yom Kippur Movie (Or the Closest Thing We Got) 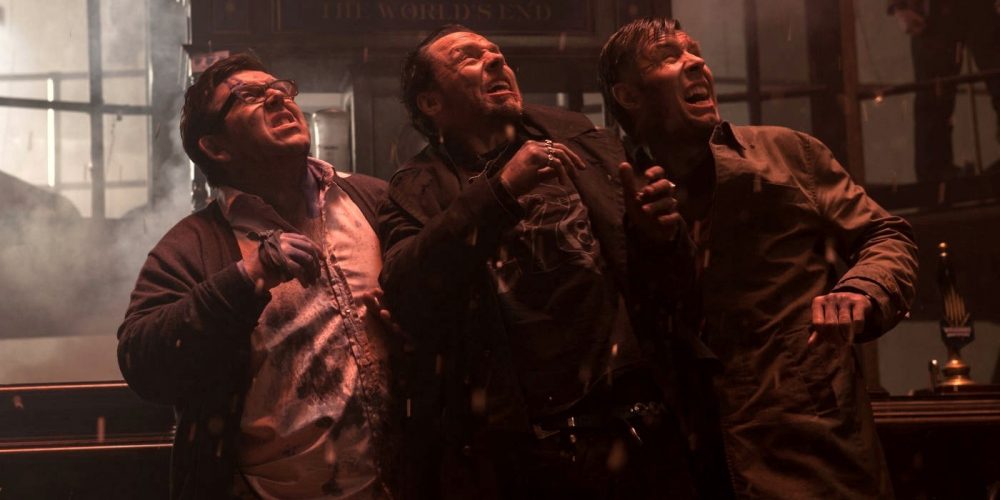 This summer featured two different apocalyptic comedies. One starred a bunch of Jews. The other starred a bunch of middle-aged British men. I deem one of these as the perfect Yom Kippur movie, and strangely enough, it’s NOT the one with all the Jews.

Granted, there really is no such thing as a Yom Kippur movie. It’s not one of those “they tried to kill us, they failed, let’s eat” kind of holidays, so the subject matter would be about as interesting as a movie about tax returns. The only things that are remotely close are Atonement (which I did not see, but I imagine is related in name only) and that episode of Curb Your Enthusiasm where Larry is kicked out of temple.

However, I think The World’s End could become our designated Yom Kippur movie. The film is about (SPOILERS ALERT) five childhood friends who reunite 20 years later to complete a famous pub crawl in their hometown. During their journey, they discover an alien invasion occurred several years ago and most of the residents have been replaced by robots. At the final pub–appropriately titled The World’s End–they encounter a god-like entity called The Network, who explains that the robot replacements are part of a process to civilize humanity and bring Earth up to par with the rest of the galaxy. Naturally, the men decline and, well… I’ll save the last 10 minutes for you to see yourself.

While This Is The End‘s message seemed to be along the lines of “save your stoner friends’ lives and you get to party with the Backstreet Boys in heaven”, The World’s End had a very clear message: to err is human. And to me, that is exactly what Yom Kippur is all about.

Here’s what I find fascinating about Judaism. There is no committee of rabbis that reviews how bad we’ve acted this year and determines if it’s necessary to repent. Yom Kippur is a day set in stone on the Hebrew calendar year after year. It is expected that we will make mistakes. If anything, we’re supposed to make mistakes. After all, to err is human. If we didn’t make mistakes, we would be nothing but ink-spewing robots.

As a sidebar, perhaps “robot” is the wrong term, since it comes from the Czech word for “slave”. Would it be better to say we would be nothing but smashy smashy egg men?

That isn’t to say that we should just shrug off our ethics and do whatever we want. It is important to strive to be better, even fully knowing that we’re bound to mess up at some point. It all comes down to the choices we make as humans. There is a huge distinction between being free and being reckless.

The characters of The World’s End understand this. By the end of the film, they admit their mistakes. Each even reveals physical scars on their bodies as proof of their mistakes (but more importantly, proof that they are human). The Network is clearly willing to forgive humanity for their mistakes and it gives Earth the opportunity to mingle with the aliens of the universe, but at the cost of never making another mistake again. On the surface, this seems like a great opportunity. But the men see right through this. They know that if they give in, they become mindless, passionless robots. To put it simply, they lose the things that make them human.

Looking back on this past year, I have made plenty of mistakes. I have lied. I have disrespected. I have coveted. Oh, how I have coveted. And I will use this Yom Kippur to ask forgiveness for these mistakes. But I know I will make just as many mistakes next year, particularly as I enter the dirty, corrupt industry known as Hollywood. Why? Because it is human nature to mess up.

If you have not yet seen The World’s End, I highly recommend it. In my opinion, it is one of the best written films of 2013, and you’ll have a fun time watching it with a group of friends before going on your own pub crawl.

Shana Tova and don’t beat yourself up too much this weekend. To err is human, so, err…