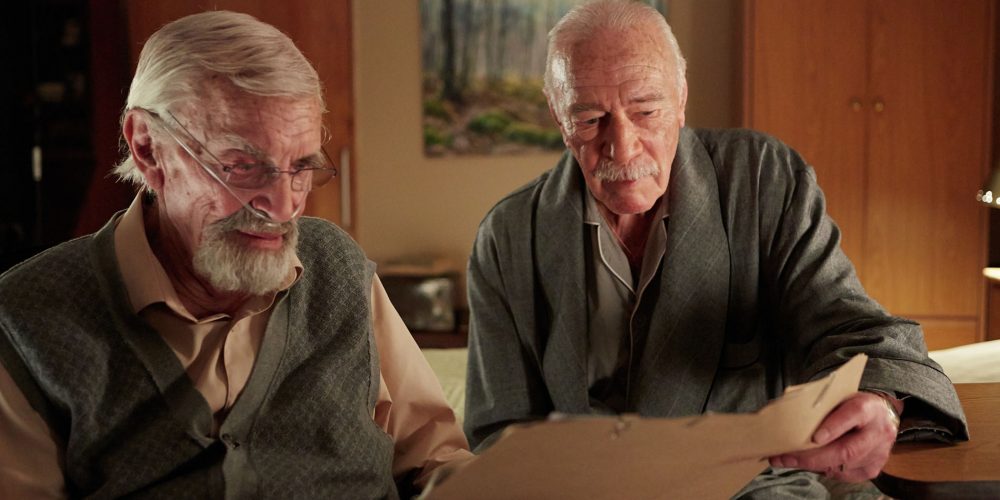 A man is on a mission to kill an enemy that wronged him years ago. However, as he carries out his plan, his memory resets every few hours. He must use a combination of luck and skill to achieve his goal before the clock runs out or he gets caught!

It sounds like the pitch for a sci-fi action thriller. But actually it’s the basis for Remember, a new film by director Atom Egoyan. Zev Gutman (Christopher Plummer) is a Holocaust survivor suffering from dementia. He lives in an American nursing home, along with Max Rosenbaum (Martin Landau), who recognizes Zev from Auschwitz. After Zev’s wife dies, Max convinces him to hunt down Otto Wallisch, the blockfuhrer who murdered both their families and is now living in North America under an alias name. Due to Zev’s problems with short term memory, he must follow a list of written instructions carefully set up by Max. All while avoiding being caught by Zev’s son, Charles, who just wants his father to be returned home safely.

It’s a simple plot, but in delves into some complex ideas. Zev is a great example of an anti-hero, a protagonist with an ambiguous moral compass. The anti-hero lies, cheats, steals, murders, all in self-interest. We as the audience know the anti-hero is not a good person, yet this is the character we root for. We applaud when he succeeds, even if it’s not for the greater good (and even if the character himself thinks it is). And usually it doesn’t bother us that we’re rooting for the “bad guy.”

So what makes Zev different from Walter White, Michael Corleone, or any Clint Eastwood character? Remember is a Holocaust movie, thus the roles should be crystal clear: the survivor is the good guy, and the Nazi is the bad guy. And from the perspectives of Zev and Max, this is still true. But when Zev seeks out to kill a man—no matter how many crimes this man committed—it is hard to see Zev as the good guy. However, he is no villain either; as a loving father and husband and well respected member of the nursing home, it is clear he is a good person. He falls straight into the anti-hero category. It’s discomforting to label a Holocaust survivor as such, because we want to see them as a heroic, but this film was not designed to make us feel comfortable.

Thus, this is how we feel throughout the film. We like Zev and we want him to succeed, yet how does one support the killing of another human? Then again… the man he wants was a Nazi. On the other hand… he was a Nazi, many years ago. On the other hand… it goes back and forth. Thankfully, the movie never spells out this dilemma to the audience, but it is a readily apparent theme.

For example in one scene, Zev enters the home of a neo-Nazi (Dean Norris), whom he believes is the son of the man he wants to kill. When the man discovers that Zev is Jewish, he harasses Zev and is prepared to release an angry dog upon him. Zev shoots the man in self-defense. At the screening I attended, a few people in the audience (95% made up of elderly members of the San Fernando Valley Jewish community) applauded after Zev killed the man. While I did not blame my fellow moviegoers for their celebratory reaction, it’s not the one I personally would have chosen.

So why am I uncomfortable when Zev kills a neo-Nazi, but I have absolutely no issue with, say, Tony Montana’s last stand in Scarfae? That work is an obvious piece of fiction, but it’s more difficult to accept that Remember is just as fictional. The fact that it is the story of a Holocaust survivor tricks me into thinking there is a little bit of truth in the story. It is true that many Holocaust survivors suffer from dementia, but it is important to note that the film is 100% fictional.

The film intensifies this theme of an ambiguous good and bad in the last 10 minutes. Without spoiling anything, a twist ending makes you reevaluate who is the hero and who is the villain in this story. From the start of the movie, you know that there will be no happy ending for these characters. And while I found the ending’s twist to be a little far-fetched, I appreciate it was not one of the more predictable ways the movie could have went.

While the story of Remember is fairly basic, with a fair share of contrived plot points, it is entertaining to watch and shares some interesting ideas about good and bad. Even a week after first viewing it, Remember is hard to forget.

Remember is now playing in select cities in the United States.