Alton Brown cooks up latkes on a special ‘Good Eats’ 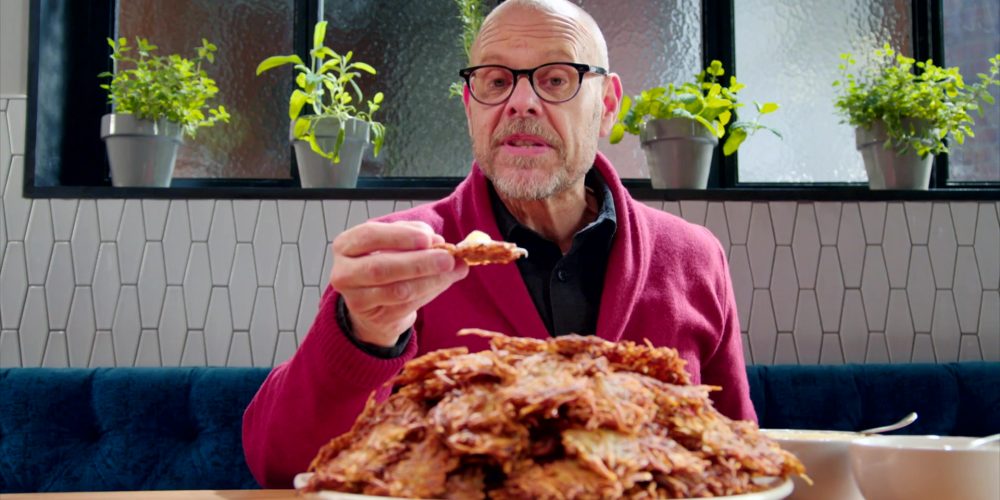 Latkes are a tradition as old as time: potato pancakes, fried up and served with applesauce and sour cream. No way to break that tradition, right?

Alton Brown proves there is more than one way to love a latke. On a new episode of Good Eats: The Return, titled “Whole Latke Love,” Brown demonstrates two recipes for latkes, with some not-so-traditional methods.

For his first recipe, he forgoes potatoes altogether and cooks latkes with ricotta cheese. Brown shares the history of this recipe: the first latkes were likely fried up by Jews who were brought to Siciliy as slaves after the Romans captured Jerusalem. Potatoes were not introduced to Europe until the 16th century, so the Jews of the time learned to cook with Sicilian ricotta cheese.

Cheese latkes are also symbolic of a lesser-known Hanukkah story, about a woman named Judith who lived a few hundred years before the Maccabees. She enters the camp of Holofernes, the Assyrian general who is attempted to conquer Judea at the time. She feeds him cheese and wine, and as soon as he passes out, Judith beheads him with his own sword.

Brown’s ricotta latkes look delicious, but everyone knows you can’t celebrate Hanukkah without the traditional potato pancake. Yet even his potato latke recipe has some unique quirks. Instead of using just an egg or a little matzah meal as a binding agent, he recommends using instant potato mix. He insists that for the best texture, the onions should be grated by hand, but the potatoes should be shredded in a food processor. And to top it off, Brown’s latkes are fried in chicken schmaltz, immediately rendering your latkes unkosher if you’re planning on eating them with sour cream.

If your blood is boiling and you’re ready to light your menorah-shaped pitchforks, you must realize that Alton Brown is defying tradition on purpose. At the start of the episode, he admits he is not Jewish (his DNA test results say he is a “totally random white dude”). He doesn’t care if your bubbe thinks he’s meshugah, and he doesn’t care about following the laws of kashrut. His only goal is to make latkes the way he wants to, and he’s boiled it (fried it?) down to a science.

Whether you want to make latkes like Alton Brown, it’s a fun episode of Good Eats. You’ll learn a little history, discover some cooking tips, and laugh along the way.

Good Eats: The Return is currently available to watch on Food Network.