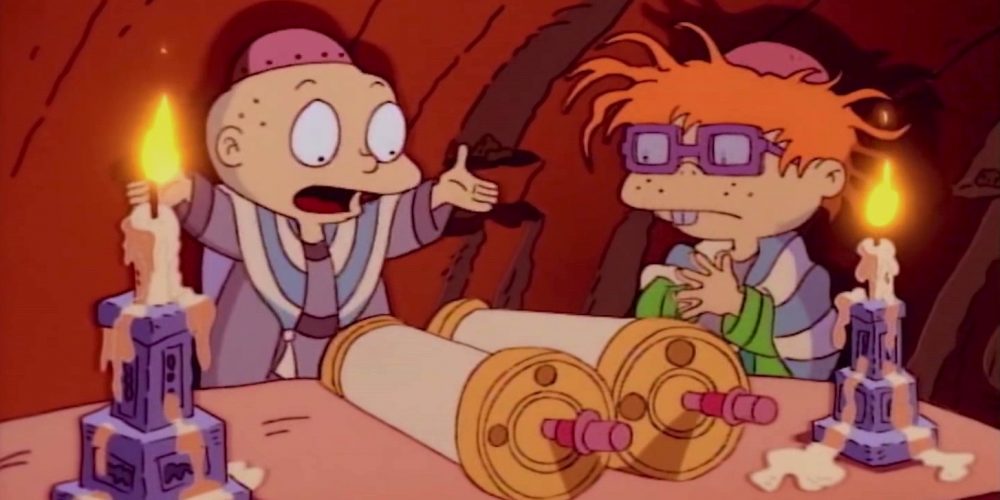 27 years ago, Nickelodeon premiered an original cartoon with a unique concept: a group of talking babies who went on adventures together and got lost in their imagination. Rugrats would go on to become one of the most popular shows on Nickelodeon, airing 172 episodes over the course of 13 years, in addition to 3 movies, a comic strip, toys, and even a star on the Hollywood Walk of Fame.

The show is special to fans for a variety of reasons, but one thing in particular is its portrayal of Judaism. Co-creator Arlene Klasky deemed it essential to include Jewish themes in the show, and thus the main character Tommy Pickles became the child of a Jewish mother and a Christian father. While Tommy’s Judaism was never the focus of the show, we saw bits and pieces of Jewish culture seeping throughout its 13-year-run.

With the news of an upcoming Rugrats revival and live-action movie, we want to explore what makes Rugrats the most Jewish cartoon on television.

1) The first holiday special answers the age-old question: “Why can’t we have cookies on Passover?”

“A Rugrats Passover” was Nickelodeon’s first program about the holiday. The episode does an excellent job teaching about Passover, including showing the different steps of the Seder and retelling the story of the Exodus. It’s not perfectly accurate; for example only half the plagues are mentioned, and apparently matzah was invented because Chuckie forgot to add yeast. Nonetheless, “Passover” is a great way to introduce non-Jewish children to the holiday while simultaneously giving young Jewish children an experience they can identify with.ye

Although a Hebrew school lesson or reading the Haggadah offers more insight into Passover tradition, this episode blends educational material with that familiar Rugrats charm. For instance, Angelica asks her mom why she can’t eat cookies during the holiday. Her mom tells her because they aren’t allowed to have bread, to which Angelica responds, “But there’s no bread in cookies!” in her typical bratty manner. Another example occurs later, as Tommy (playing the role of Moses) explains to Phil and Lil how Passover received its name. As the characters in the show learn, so does the audience.

Lastly, this episode gave us what should have become one of the most iconic lines in pop culture history: “Don’t close the… door.”

2) The Chanukah episode has some of the best Jewish puns ever.

If the Passover special was designed to teach kids about Judaism, then “A Rugrats Chanukah” was created to pander to a Jewish audience. It is full of hidden Jewish jokes, including a giant Mohel sign in Hebrew, occasional slips of Yiddish, and a scene where a man dressed in a dreidel costume slips and falls on his shin (get it?).

While the show still manages to tell the story of Chanukah, this episode hones in on the modern traditions of the holiday. It has everything: latkes, menorahs, dreidels, music, and the obligatory synagogue Chanukah play. But compared to “Passover,” this episode focuses much more on Tommy’s Jewish identity. Tommy and his friends are introduced to Chanukah as “that time of year between Christmas and Thanksgiving when all the best holiday shows are on TV.” They notice things are different around the house… a menorah sits on top of the TV, Tommy receives a present every night, and they even eat pancakes for dinner. Tommy understands that these are different from the norm, even if he is too young to understand why. This becomes the foundation of his Jewish identity, something he will explore later on.

It’s also important to note the side story of Stu Pickles, Tommy’s non-Jewish father. On Passover, he showed minimal interest in the holiday and ended up leading a dry and unenthusiastic seder. For Chanukah, Stu wants to redeem himself in the eyes of his wife and son. Perhaps building a giant explosive menorah isn’t the best way, but it’s the thought that counts.

It will be forever debatable if “Passover” or “Chanukah” is the better episode, but overall “Chanukah” is a more heartwarming adventure. I also appreciate that they spell Chanukah the correct way. ;)

3) Boris and Minka are the perfect old Jewish couple.

Holidays aside, how did we get our Jewish fix on Rugrats for the rest of the year? Through Tommy’s grandparents, Boris and Minka. While they were introduced in the first episode of the show, it wasn’t until “Toys in the Attic” that we got an episode all about them.

I find that there is something endearing about old couples, so this much screen time for Boris and Minka is a real treat. They constantly fight throughout the episode, but in the end they demonstrate their unwavering love for one another. Their thick-accented dialogue is peppered with all sorts of Yiddishisms, like fakata, tchotchke, and tatela. Minka even asks Boris if he hurt his shmegegge (which we assume the writers subtly meant his penis).

The episode’s plot also involves a dybbuk, or a wandering soul of a dead person which possesses the body of a living person. Who says you can’t start teaching Jewish folklore to children at a young age?

4) They used this random but wonderful horah pun.

After the Passover and Chanukah specials, the show did not spend much more time building the Jewish world of the Pickles family. Instead, Rugrats honed in on other important things, like how many diaper jokes they could include per minute.

However, this bit managed to get through the cracks.

In the episode “Clan of the Duck,” Chuckie finds himself trapped among a group of Israeli folk dancers (one of which may or may not be Albert Einstein), and then he has a panic attack channeling his inner Colonel Kurtz.

While “the horah, the horah” is not exactly groundbreaking use of Jewish culture on TV, it is still an amusing gag in an otherwise forgotten episode. (Unrelated, “Clan of the Duck” was ahead of its time tackling transgender and sexual harassment issues.)

The next time that Rugrats explored Judaism was not in the show itself, but in its spinoff series All Grown Up, where the kids have aged from babies to preteens. The episode “Rachel, Rachel” begins with a realistic scenario for 11-year-old Jewish boy: Tommy doesn’t want to attend Hebrew school to prepare for his bar mitzvah.

But Tommy’s opinions change when he discovers the real reason to go to Hebrew school… girls. He develops a crush on his classmate Rachel (they would name her Rachel, wouldn’t they?), who has a passion for Judaism and helping others. This is a far cry from Tommy’s background, where he isn’t even familiar with the word Shabbat.

It’s nice to see some Jewish references in a non-holiday special. There are bits of Hebrew words in the background of scenes, but nothing compared to the Mohel joke from years earlier. This episode challenges the interfaith aspect of Tommy’s life far more than “Chanukah” or “Passover.” Tommy realizes his lack of a Jewish upbringing and tries to make an effort to enjoy Hebrew school, even if it is mostly to impress Rachel.

“Rachel, Rachel” also contains a Boris and Minka origin story, with flashbacks to how they fell in love in the “Old Country.” Not sure if it should be considered canon (did Boris seriously turn from a vegetarian into a meat lover?), but it’s nice to see that Tommy’s Jewish grandparents weren’t completely forgotten in the spinoff show.

We had trouble choosing a specific clip, so we included the entire episode below. Chances are you’ve never watched it before anyway.

6) Most importantly, Rugrats left an impact on Jewish children.

It might be a bold claim to call to call Rugrats the most Jewish cartoon on television, considering Judaism was never the forefront of the show. Yet 27 years later, the Jewish themes still continue to stand out.

While doing research for this article, I came across a thesis paper written by Teri McGuire, a grad student at Brandeis University. Teri conducted interviews with 25 other students who had grown up in the 90’s and identified as Jewish. One of the questions she asked was “When you think of Jewish characters and shows, who and what do you think of?” All but 3 students mentioned Rugrats in their answer. Teri also noted that many of the students remembered the details of “Passover” and “Chanukah” better than any other characteristics of the show.

First of all, what an an awesome topic for a thesis! Secondly, it shows what kind of impact Rugrats left. The holiday specials, Tommy’s grandparents, and the occasional Jewish themes made the cartoon instantly relatable to children with different Jewish backgrounds, including religious, non-observant, and interfaith. Furthermore, these Jewish themes were educational, charming, and memorable.

It’s too early to know what to expect with the upcoming Rugrats franchise reboot. It could be a complete disaster, or it could be the winning element that brings Nickelodeon back to its glory days. We only hope that the Jewish themes don’t disappear. Is it unreasonable to ask for “A Rugrats Shavuot” special?